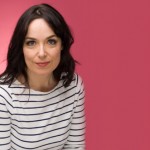 Anna Johnson (pictured) is the artist behind the illustrations you see on this website, and our  book, The Holiday Goddess Handbag Guide to Paris, London, New York and Rome.

Anna is just one of the many bestselling novelists, cult bloggers, journalists and passionate travellers working on Holiday Goddess. Together with guest reviewers, they spent over a year curating the best holiday secrets in their favourite cities. The book (and four separate iPad editions) is the result.

Anna Johnson  is also the artist and designer behind Little Branch and the author of The Yummy Mummy Manifesto, Handbags – The Power of the Purse and Three Black Skirts.

Anna’s books have been translated into 15 foreign languages, and her career adventures include Grazia (where she was the New York correspondent) and Conde Nast Traveller.

About The Holiday Goddess Handbag Guide to Paris, London, New York and Rome

In 2002, novelist and astrologer Jessica Adams published  21st Century Goddess (Allen and Unwin) with bestselling authors Jelena Glisic and Anthea Paul. Almost ten years later, it was time for a very different kind of goddess to be born – one who loved travel, but longed for a handpicked guide. Illustrator and author Anna Johnson, working with Jessica Adams, helped to bring together more than 30 writers  and many more well-travelled contributors for the book. Most of them are also editors at Holiday Goddess. Their shared career adventures include Lonely Planet, Cosmopolitan, Vogue, Luxe Guides, Rolling Stone, Harpers Bazaar, BBC-TV, Triple J and Mad magazine.

Holiday Goddess supports a number of non-profit organisations through its website, including Dogstar, the amazing charity which helps the street dogs of Sri Lanka.

Jessica Adams is the editor of The Holiday Goddess Handbag Guide, a team editor on the Girls’ Night In and Kids’ Night In series. She is a Contributing Editor at Cosmopolitan UK and the author of several bestselling novels.  She is also the Managing Editor of holidaygoddess.guide.

Victoria Aitken’s music has topped the UK dance charts four times in a career that has taken her from Istanbul to Paris. She is a well-known freelance travel writer in Europe and the US.

Eleonora Baldwin is an American born, Italian raised writer, gourmet connoisseur, and culinary travel enthusiast. She lives in her small Rome flat with her son and many dreams.

Helen Basini is currently studying for her PHD at the University of Limerick, Ireland. She is team editor on the Kid’s Night In series in aid of the children’s charity War Child.

Faith Bleasdale is the author of six books and working on her seventh. She lives with her toddler in North Devon which she reached via London and Singapore.

Janine Brown is a Graphic Artist and greeting card designer, who has collaborated on several books with Affirmations Publishing House. She’s a seamstress and passionate about vintage.

Peter Clarke is a DOP and Cameraman who has been smuggled into Sri Lanka, but also covered interviews with Tom and Nicole. He now runs Heaven and Earth Films.

Andreina Cordani is a travel-obsessed writer whose magazine career has spanned from Cosmopolitan to Good Housekeeping.

Pip Cummings is based in New York. She has worked as a Deputy Editor at McHugh Media and Fairfax Media, and was Curator and Editor at TEDx in Sydney from 2010-2011.

Jane de Teliga is a fashion writer and stylist, with a passion for travel. A contributor to the media in London and Sydney, she co-created personal styling service, styleoncall.co.uk

Imogen Edwards-Jones  is the author of internationally bestselling Babylon series. She has travelled all of the world and is an honorary Cossack.

Leonie Edwards-Jones After fifteen years of working in fashion and photography in London, she is now based in Delhi, bringing a bit of London to India and vice versa.

Lily Evans is a stylist and has worked on shoots for international editions of Vogue and runway shows including Victoria’s Secret.

Sara Foster is the bestselling author of two psychological suspense novels, Come Back to Me and Beneath the Shadows, and is always on the lookout for the next travel adventure.

Mia Freedman is the editor and publisher of mamamia.com.au. She is a former editor-in-chief at Cosmopolitan, Cleo and Dolly and the author of The New Black, Mama Mia and Mia Culpa

Harriet Griffey is a writer and journalist, and the author of fourteen books. She has lived in Camden, London for the last 25 years. For more visit www.harrietgriffey.com

Louise Hawson is the Sydney-based author and photographer of the cult blog and book 52 suburbs. She is also an award winning copywriter and art director.

Wendy Holden, a former journalist, is a writer of comic novels with ten top ten bestsellers under her belt. Recent books include Filthy Rich, Gallery Girl and Marrying Up.

Alana Hunt is an artist and writer who works between the Sydney suburbs, the streets of New Delhi, the occupied valley of Kashmir and the East Kimberly region of Australia.

Bethea Jenner is a writer, astrologer and Londoner who left the music industry in 1990 to concentrate on esoteric disciplines. London Transport is just one of her obsessions.

Anna Johnson has written for magazines including Vogue, Conde Naste Traveller and Vanity Fair.  She is the author of Three Black Skirts, The Yummy Mummy Manifesto and Handbags.

Rachel Johnson has three children, two houses, one husband, and a dog. She edits The Lady, and is the author of Notting Hell, Shire Hell, The Mummy Diaries and A Diary of the Lady.

Anneli Knight is author of Flirting with Finance, contributor to The Age and Sydney Morning Herald in Australia and has recently completed her PhD in creative writing.

Daria La Valle qualified in International Relations in Rome, then moved to Singapore to marry her long-time-long-distance love. She tries to return to Rome whenever she can.

Emma Killick is an avid gardener, California lawyer and UK solicitor. She has travelled all her life, and is now based in London, escaping often to a farmhouse in France.

Helen Lederer is well-known for Absolutely Fabulous, Calendar Girls and The Vagina Monologues. Her wine expertise has featured in the Sunday Express and on the BBC.

Felicity Loughrey is the Editor of Vogue Australia online at www.vogue.com.au. She writes for Vogue Australia, Vogue Living, GQ, Men’s Style, Sunday and The Australian Way.

Kathryn McCusker has taught in many leading yoga studios throughout London, including Triyoaga and Alchemy.

Kris McIntyre is best known as the host of Australia’s Yoga TV. She’s a writer, editor and yoga teacher with a love for wellness travel. Visit her at www.krismcintyre.com

Karen Moline is a NYC-based novelist, journalist, and ghost-writer who has travelled the world in search of all things divinely, delectably, and deliriously Goddess.

Rosie Mullender is Cosmopolitan‘s commissioning editor and ‘Sex and the Single Girl’ columnist. She blogs about single-girl life and burritos and recently made her very first trip to New York.

Freya North is currently working on her twelfth novel.  She lives on a small farm in Hertfordshire and classifies her bestselling novels as ‘feisty romps’.

Justin North is one of the world’s most acclaimed chefs and the author of two award winning books Becasse: Inspirations and Flavours and French Lessons.

Rachel Oakes-Ash is a journalist, travel writer, documentary maker, author of two books and ski writer for the Sydney Morning Herald and The Age.

Tyne O’Connell’s thirteen novels are inhabited by British eccentrics and aristos at large. She has written features for Vogue and Elle. For more visit www.clementyne.com

Sue Ostler runs Flirt Diva Therapy in London. She is the author of several books, and has written for Rolling Stone, Metro and Time Out. Visit her at www.flirtdiva.com.

Jane Pirkis is an academic psychologist based at the University of Melbourne> She has published more than 120 scientific journal articles on various aspects of mental health, and is a firm believer that travel is good for the soul.

Tamara Pitelen is the Dubai-based editor of Wealth. She has written for newspapers and magazines for 18 years and has lived in Asia, England, New Zealand and Australia.

Tamara Sheward is an author, travel writer, guidebook author/ occasional TV presenter for Lonely Planet and co-editor of anthologies Your Mother Would Be Proud and Kid’s Night In 4.

Rebecca Sparrow is a travel writer, novelist, journalist and now Deputy Editor of Mamamia.com.au .You can read more about her at www.rebeccasparrow.com

Noah Taylor has been tooling around with film and music for 25 years. He’s smoked Turkish cigarettes with Sir John Gielgud and made some unpopular records. He lives in Brighton

Jenny Valentish has worked as an Editor on triple j magazine and Your Mother Would Be Proud. She is a writer whose freelance work includes The Sydney Morning Herald and NME. =

Julian Venables is a life-long traveller and astrologer. His adventures include BBC radio, podcasting on The Astrology Show, writing for New Woman and Solar Fire Gold software.

Donna Wheeler is the author of several Lonely Planet guidebooks and also writes on art, architecture and food. She divides her time between Melbourne and Europe.

Susan Wyndham is the literary editor at The Sydney Morning Herald and a former editor of Good Weekend and New York correspondent for The Australian.