The Blue Room – A Short Story by Lily Gutierrez

"A constant safety net in my life has been the blue room. I'm endlessly grateful to have it. A short story by Lily Gutierrez"

For my first time in many years I am sleeping in the blue room.

I haven’t slept in it since it was redecorated. It is, of course, still blue, but the childish element of its aesthetic has gone. This was done to create a more functional guest room rather than keep it as it was, a strange time portal into my past.

The blue room is in El and Tom’s house on the high street. I first came into the house before they owned it, in it’s former incarnation as a vicarage. I remember the house being all anaemic colours and stale air. I sat in the front room and read bible passages with forgettable children and a vicar ahead of my confirmation. I was suspicious of christianity and questioned it all.

Years later I returned to the house of my confirmation lessons to do very ungodly things.

I lived two streets over in a house with my Dad and siblings. No one else was allowed into the house and we had a huge and vicious guard dog to make that clear. I never knew why no one was allowed over. I guess I internalised it and thought it was because I was bad or annoying. But as I adult I see it was probably more to do with the guns kept in the house, the safe under the floor boards and the knuckle dusters and steel tipped base ball bats.

Sometimes Venus came over, that was always very stressful because Venus was bad.

I never slept well growing up, I had insomnia after my mum died and I stressed a lot about the food shopping each week. My weekends were paradoxical, spent in the big house on the high street.

El invited her goddaughter Venus and her sisters to stay most weekends, which meant she also had me to stay, seeing as me and Venus were inseparable.

Me and Venus shared the blue room. Teenage years were spent in innocent sexual awakening. Wriggling and giggling in the big bed we shared.

One night I woke up to Venus having sex with a guy next to me. I only remember his cowboy hat.

When I was 18 I broke up with the boyfriend I was living with and El let me stay for a couple of weeks. The blue room felt lonely and I moved to London to live with Venus.

I worked in London for a year but in that time some crazy stuff happened and I ended up inpatient in a mental health clinic. When I came out I had no job, no home, no partner and no money.

El welcomed me back to the blue room.

She knew I wanted to die.

She made me wake up early and do yoga, she fed me brown rice and veg, she paid for me to see my first good therapists.

A couple of months later I flew to New York.

I moved to New York to live with Venus and her husband. The husband ended up in a mental hospital and I stayed and had tons of threesomes with Venus.

And when I visited Hastings, I stayed in the blue room.

And later when I bought my girlfriend to England, we stayed in the blue room- after the Bahamas but before India.  El was the least homophobic person on the whole trip.

And I spent birthdays in the blue room.

And I brought friends to stay in the blue room.

And I had Christmases in the blue room.

One Christmas I was in the bathroom upstairs and I heard the family in the garden below talking about me.

“Why is she here, she’s not even family.”

I said nothing. I stayed in the blue room.

In the morning my stocking from El was the biggest.

On my wedding day me and Venus woke up in the blue room. She gave me all kinds of gifts, I crossed the road to the church feeling like a grown up but now I know I was still little.

And then, when Venus died I flew back from New York and stayed the the blue room. My sister picked me up from the airport, I was in shock. She gave me a cadburys cream egg. It helped. I don’t think I’ll ever be able to eat one again.

I thought I would die in the blue room.

I found out I was pregnant weeks later in the blue room.

I laughed and told no one until Claud flew back.

I shared the blue bed with Venus’s other best friend while I was pregnant. I held her and gave her reiki and stopped her from dying.

I gave myself and my baby reiki until the reiki energy ran out.

“It can’t run out.” I was told by the other reiki people. But it did.

My whole life I have suffered from sleep walking. I’ve woken up mid air, four stories up having almost entirely climbed out a window in my sleep. Most nights I wake up screaming, shaking or standing somewhere strange. I have some stories that will never leave my lips, but they come out in my sleep.

I never sleep walked in the blue room.

Eventually I stopped staying the the blue room. My first baby was born and the big bed in the blue room felt too high to sleep in with a newborn so we got used to the pink room instead.

And people stopped using the blue room altogether until eventually it was redecorated.

Recently I brought someone into the blue room. I told them about how I grew up in the room and was lucky to have it. Like a stray cat who found the neighbouring house with the best cream.

They listened so gently it made the space feel warm in a way it hadn’t for a while.

I started coming back to the blue room when I felt like I needed a second.

I’d Paint my nails on the bed.

Read poetry, or text or stare at the wall.

If I look back at the things that happened between my stays in the blue room I see a tightrope walk between desire and disaster. I have escaped death too many times to be a cat, I’m a fucking cockroach.

But a constant safety net in my life has been the blue room. I’m endlessly grateful to have it.

The dangerous looking girl, waiting for me when I got out of church, was the key. Venus took me back to the house I’d once read the bible in. El and Tom made it a home, filled it with colour, good food, endless generosity and replaced religious judgement with open acceptance and love.

In my early teens I used to break in. El and Tom would come home to find me eating from their fridge.

And I’d frown to say, It Was Easy.

They spent thousands on security systems and locks.

Then just gave me a key.

I’m glad they did because.

I still need the big bed, a safety net, the blue room. 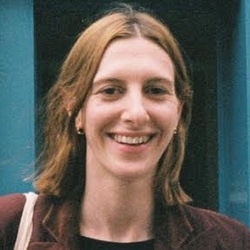 Lily Gutierrez is a writer and designer based in St Leonards, UK. She is also the founder of Story Time, a project that collects stories via art and events in the hope of creating meaningful connection amongst the global community.
All Posts