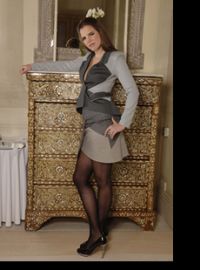 Victoria Aitken – a London based songwriter and singer -– has performed to audiences in London, Manhattan, Berlin, Dubai and Paris. Victoria’s distinct sound has consistently reached prime positions on the UK and European dance charts. Her songs have received note and praise in publications such as The New York Times, New York Magazine, Vogue, GQ, W, Elle, The Daily Telegraph and E! News.

Her tongue-in-cheek song writing abilities have sparked controversy. She is renowned in England for her tongue and cheek lyrics, and previous top 10 UK Dance Hits, such as “Queen of the House” reaching #5, “Vicky from the Yacht” which echoed her riches to rags tale and 2012’s “Fashion Boy”, a tribute to supermodel Andrej Pejic.

Her latest song “Weekend Lover” appears as the lead song in Whit Stillman’s highly received “Damsels in Distress” and has provided her crossover into the US market.